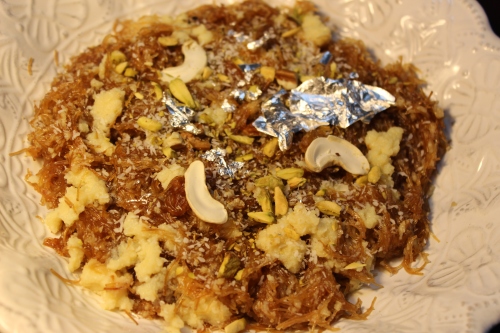 Qemami or Qimami shewai is one of the gems of Luknowi kitchen !!! This is not Muzaffar or shewai zarda nor it is a shwai halwa !! This one is so unique in flavor , you will die for !!! The process though pretty simple , involves a little trick so that not to make the shewai/ shemai a halwa kind of thing !!! And the trick is don’t stir the shemai after adding the Qimam/ syrup until the liquid dries out , making the shemai in tact but soft without making it lumpy or mushy !!! The traditional Qimami shemai includes a special ingredient , fox nut/ makkhana , the edible seeds of Lotus flower !! But it tastes great even without makhana .. It tastes divine !!! 😀

1. Boil sugar , water , milk together with 2 cardamoms , 1 small stick of cinnamon and saffron . Reduce a bit . The qimam or syrup should be reduced but thin . It should have one string consistency .Around 10 minutes .

2. Heat ghee in a wide vessel and fry the shewai until dark brown ( don’t burn it ) . Add the nuts .

3. Now add the syrup to the shewai and let it cook . DON’T STIR!!! If you do so , it is going to be mushy . The shewai should be in tact but well cooked . You will see the milk syrup is curdling , don’t worry , that’s just fine . Sprinkle a pinch of nutmeg , if you like the flavor . Cook without stirring until dries out . I am repeating again , don’t stir until the liquid is completely dried out . Turn off the stove .

4 . Let the shewai cool down , or else it will become mushy . When it’s cooled , mix the khoya gently with a fork and transfer it to a serving dish.